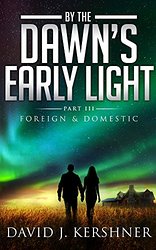 In today’s podcast we talk David Kershner, who is a post apocalyptic world (PAW) author. We have an interesting discussion about the central question he poses in his books: What would it take to remove GMO’s from the US food chain? And, what would it look like if we did so abruptly?

David currently works as an Analyst and lives with his wife and two children. He was born and raised in the southeast and spent much of his childhood in the small towns of northern Virginia and southern North Carolina. David’s previous works include the first three installments of the Foreign and Domestic series (When Rome Stumbles, Hannibal is at the Gates, and By the Dawn’s Early Light),

as well as a non-fiction cooking and entertainment book titled Just a Small Gathering. He is currently working on the fourth installment for the Foreign and Domestic series, Colder Weather.

Mon is a full-time Clinical Herbalist, Homesteader & Homeschool Mom of 7 (mostly grown, only 2 are left at home and all but one have graduated!) She spends her days on the homestead enjoying her family, gardening, making herbal medicine, teaching, speaking, blogging, reading, and cooking.

6 of our favorite nitrogen fixing plants that we either plant or encourage the spread for the natives ... See MoreSee Less

In this video I cover out top 6 nitrogen fixing plants we incorporate into our gardens. I take examples from our edible forest garden and our medicinal garde...

Loving our harvest this year. The best one yet! Every year gets better and better - Mon ... See MoreSee Less

This is generally where we recommend people start as beginner gardeners and homesteaders. Easy, low maintenance and abundant! ... See MoreSee Less

What to Start Growing First on a Homestead

This is usually what we recommend people start with for those that are interested in growing their own food. Why? These are easy to grow, they are health bui...

Depending on context, this is usually what I recommend when people ask me about growing their own food. 9 times out of 10 the traditional advice is the vegetable garden. Nothing wrong with the vegetable garden but these are where we advise people to start their food growing, health building, immune strengthening journey. Eggs, greens, berries, mushrooms ... See MoreSee Less

Growing Goumi Berry... sweet yet astringent much like honeyberry but with a different flavor profile. ... See MoreSee Less

Elaeagnus multiflora, or goumi berry is native to China, Korea, and Japan. We have had good success here in North Idaho (48 deg N lat). It is an excellent sh...